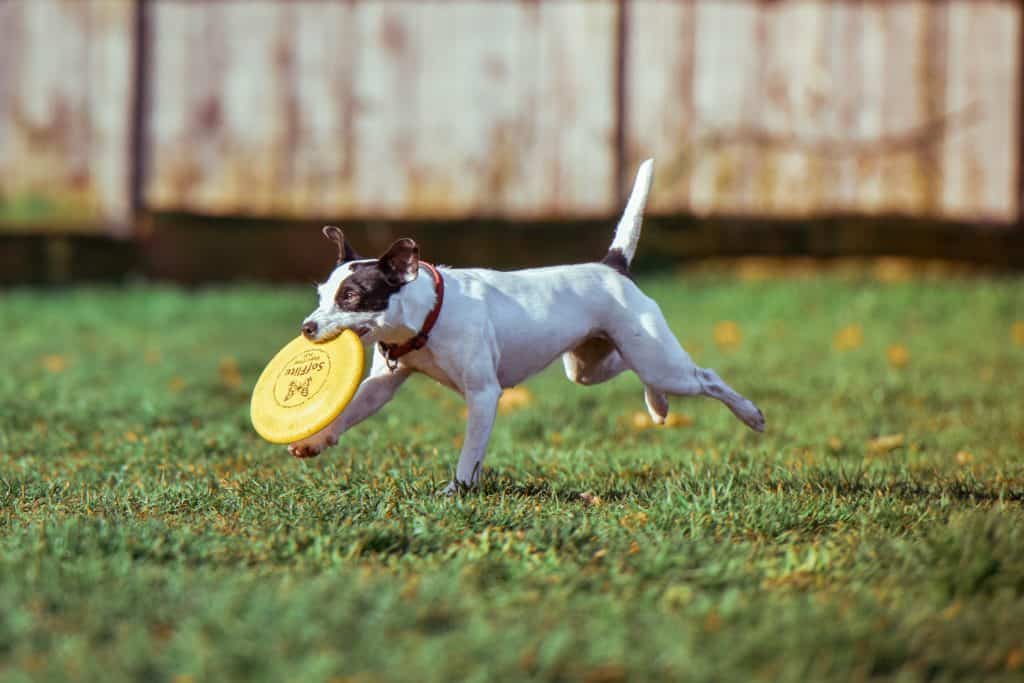 Dogs need to be dewormed at least occasionally. There are a lot of dewormers out there to choose from, but the most commonly used is Nemex Pyrantel Pamoate. It’s an old-standby that’s been used since you were probably a pup yourself, and is generally safe to use on most dogs (but always double-check).

Finding a good dewormer is only half the battle though – the other half is keeping up with preventative care. This is especially important for older dogs or dogs who are generally more vulnerable to illness. Worms can be serious, even life-threatening, and it pays to stay ahead of the problem.

A lot of wormers are designed to treat the most common parasites such as hookworms and roundworms. These are the typical wormers you find in the store. You cannot assume that a wormer is going to address all the parasites your dog may have. Tapeworms are rarer in dogs but a lot of the less expensive and easy to get wormers do not treat them.

What Does a Dewormer Treat?

Some tapeworm tablets are harder on your dog, by necessity. Tapeworms require stronger medications to be eliminated entirely. There are a few gentle wormers that can deal with all types of worms but they cost substantially more, especially if you have a large dog.

Panacur and other fenbendazole wormers get rid of all major parasites and are basically impossible to overdose a dog on.

If you really want to take care of all major worms your dog may have then you should use Panacur. It is more expensive but it is so safe to use. Puppies, pregnant dogs, senior dogs, etc., can all safely tolerate Panacur and other fenbendazole-based wormers.

Things to Keep in Mind When Shopping

The cost of the dewormer and the size of your dog are two of the most important things to remember while shopping for the best option. Some wormers are priced a lot higher than others. Name brands will, of course, be more expensive than generic and if you choose a new brand of wormer that is only made by one manufacturer you are probably going to pay more than with another choice.

With a small dog even buying the most expensive wormer is often not a lot of money. With a 120lb dog, the cost can triple. Panacur granules, for example, are $10 for a quantity effective enough to worm a smaller dog, but the cost goes up to $30 when you have a giant breed.

If your dog is picky it can make it hard to get that medicine down. Hiding a tablet in a favorite treat can work for a lot of dogs but there are some out there that just seem to know that something worthy of suspicion is in there. Liquid can be mixed with wet dog food that does a good job of covering up the taste. Granules or powder wormers can just be sprinkled on kibble but dogs seem to be better about eating all of the powder if it is incorporated into something moist and delicious.

Your veterinarian
can advise you on what worms are the most common in your area. You
may not need to treat some parasites as aggressively or as often as
others. Some dogs are more prone to parasites than others. Hunting
dogs and those that spend a lot of time outside can be exposed to
higher parasite loads. If your dog sometimes hunts on their own you
need to be more on guard for parasite issues. Rabbits and other small
game are notorious for being carriers of tapeworms.

Some wormers may advise not giving it to puppies under a certain age. Safeguard, Panacur, and Pyrantal Pamoate (Nemex) are all safe for very young puppies. Always double check age and pregnancy restrictions before giving to puppies or pregnant and/or nursing mothers.

There are a few established players in the market that you really can’t go wrong with.

Both of these wormers need to be administered for 3 straight days and you need to be careful to not miss a day. It is not the end of the world if a dose is a few hours late but chronically being late or only giving wormer for a day or two can help increase resistance to parasites that your dog may be battling. This means it may become harder to get them clean of a parasite load. When I use this stuff I just make sure to put the packets beside the dog food bag or scoop and that reminds me that I need to add the granules in.

Splitting Up A Dose

If you have smaller dogs then you are better off buying the larger packets of Safeguard or Panacur granules. For example, a package designed for a 40 lb dog could be used to treat a 12 lb dog 3 times for one low price. In this case, you would split a single packet that treats 40 lbs of dog into 1/3 dose and give for three days. It is not hard to separate a packet into 3 days and it means you are paying very little to give your dog a safe and complete wormer. Since the medication in both of these brands is so safe it really will not hurt if the dose over 3 days varies a little. The large packs can be cut up even more as well. 1 gram of granules is one day’s treatment for a 10 lb dog. So you could worm 4-5 chihuahuas for the same cost as worming a single 40 lb dog! 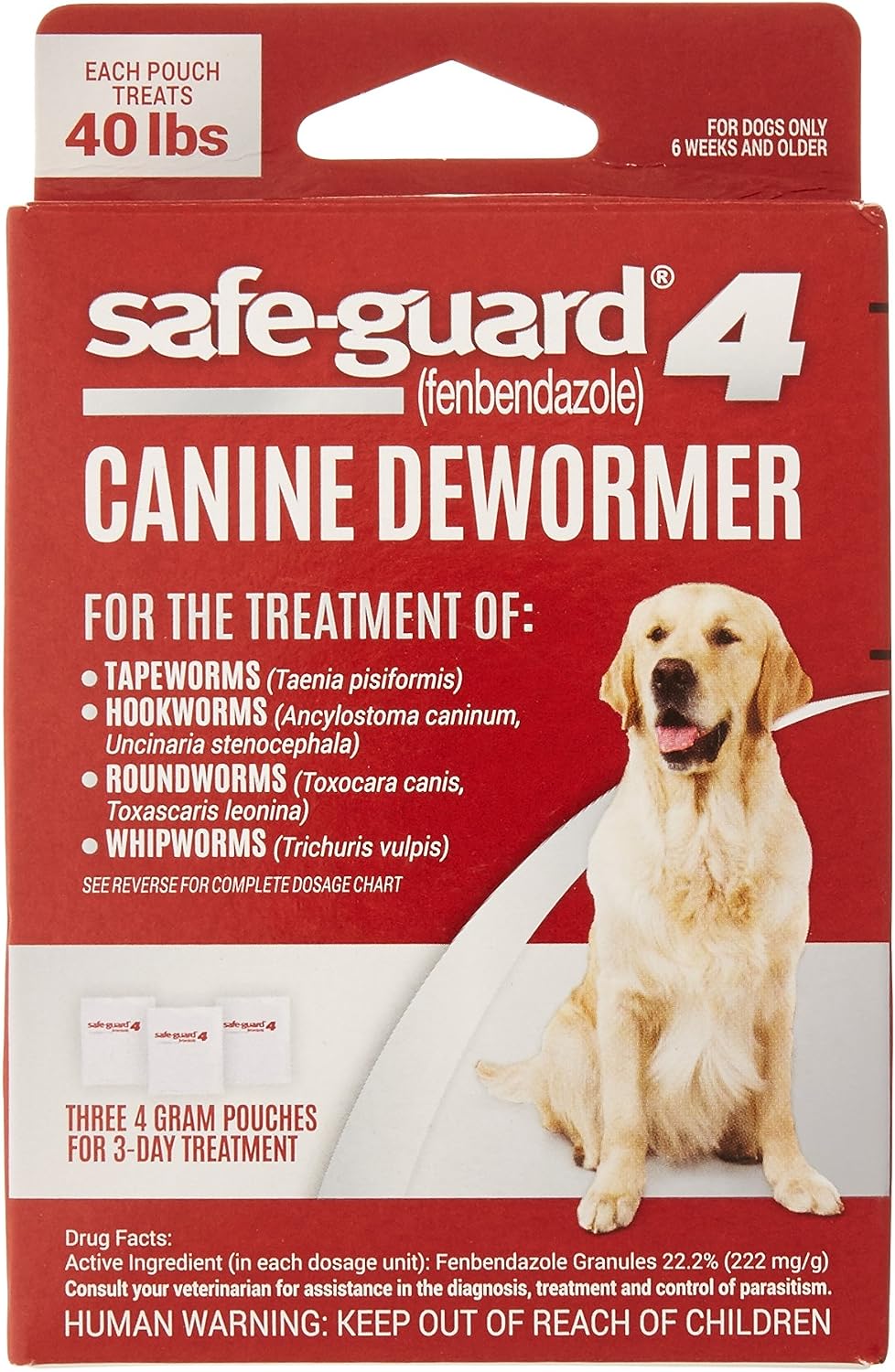 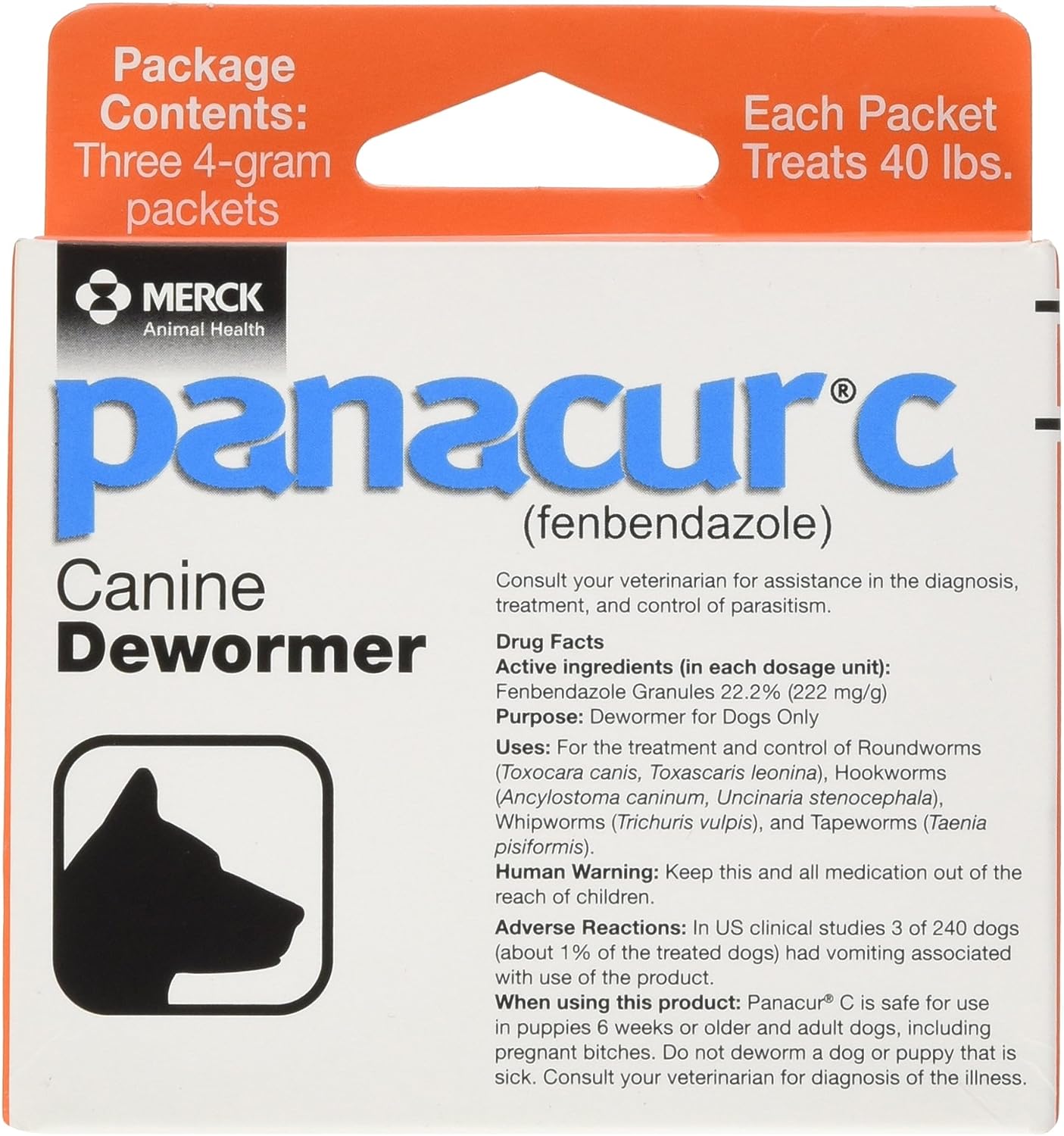 This is the standard
wormer that is used on a lot of puppies and dogs. It is so common
that any grocery store carries some form of it. It is even used in
people to treat parasites so it is considered a safe wormer for most
any dog. You can save a lot by purchasing generic versions of Nemex.
A lot of folks with multiple dogs buy this in a larger container so
they can keep up with parasite control more easily and an affordable
price point.

This is the generic version of pyrantel pamoate available at bargain price. If you have multiple dogs and cats to treat then this is an economical option compared to the name brand. This bottle will treat over 9,400 lbs of dog! Even if the product expires before you use it, it is still a better value than most other wormers. You can also get smaller 16 oz bottles if desired. 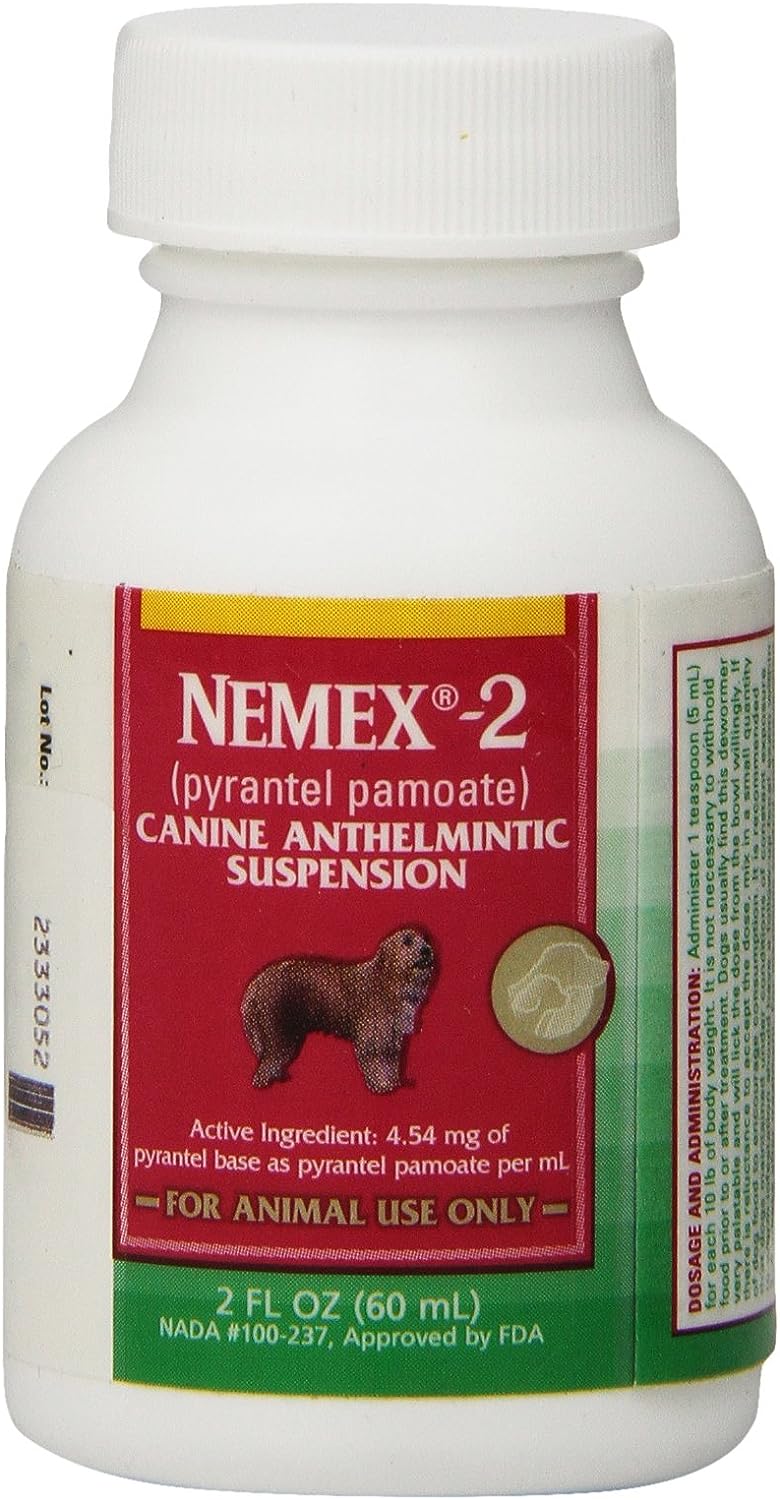 Some wormers will take care of heartworms and some other parasites but there is yet to be any that absolutely covers everything. Usually, the best you can do is two medications used for total parasite control. When in doubt about what type of dewormer to buy, ask your vet. Vets can help find the wormer that fits your budget and the lifestyle of your dog. A reputable veterinarian will be willing to listen to your needs and concerns regarding wormer. If they keep trying to sell you on the most expensive treatments and ignore your concerns then that is a sign that you don’t have the veterinarian that is right for you. At the same time, you need to be reasonable in your expectations of what a quality medication will cost and how important it is to the health of your pooch.

While any dog can
get worms, there are things you can do to prevent them from occurring
as frequently.

Dogs can pick up
worms from other dog’s feces. Most parks and trails have strict
rules about cleaning up after your dog but that doesn’t mean
everyone listens. If one park is cleaner than the other then you
might want to frequent it more.

It is instinct for some dogs to hunt and it can be difficult to prevent them from doing it when you are not looking and consuming or at least licking on what they caught. Those that have working dogs that are running around in acreage are going to have a hard time with this one but if you see your dog gnawing on something they shouldn’t then take it away. It may be gross to have to do this but it is best for your dog for many reasons.

Diatomaceous earth
can eliminate a lot of types of parasites and is excellent at
preventing infestations. You just have to add a sprinkle to their
food daily or every other day. If you suspect they have a parasite
issue you can use more. This is very dusty stuff so it is more
appealing to dogs if you can mix it in with some flavored liquid like
broth or wet dog food.

Tapeworms are dependent on fleas for transmission so keeping on a good flea prevention regime can help keep them from making your dog their host. How strong of a flea regime you need depends on a lot of factors. Many dog parents use a monthly treatment.

Pumpkin seeds ground
up and added to food can help eliminate worms. Fermented foods also
provide worm prevention. Dogs that eat dry kibble are the most
susceptible to worms due to the amount of starches and sugars in the
mix. Feeding your dog a diet that is lower in starches and sugars is
a good way to improve their overall health and make them less
susceptible to worms.

Winning the Battle Against Worms is Not Impossible

Purchasing a year’s worth of wormer at once for your dog is one way to make sure you don’t put off worming them. Set a reminder on your phone for each date your dog is due to be wormed. Scout suggests also having some diatomaceous earth on hand to occasionally add to prevent worms. You may be able to reduce the number of times you need to worm your dog per year by just putting it in their dog food a few times a week.